How to Solve MP4 Won't Play on Samsung TV? 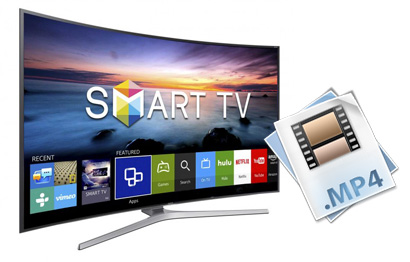 A smart Samsung TV is a big entertainment in our daily life. Most of you would like to transfer some downloaded video files onto it for enjoyment on the big screen. However, when you tried to add MP4 videos to Samsung TV for enjoyment, you may fail to do the job. Well, can Samsung TV play MP4 files? Before answering the question, let's see some frequently asked questions quoted below:

"I just made some mp4 files with my phone. Put them on Stora and browsed to the folder with TWO TVs. A Samsung and an Aquos. The Aquos said, "Data not available". The Samsung doesn't show any files."

"I want to watch films - in .mp4 format it shows me the films on the menu screen on the TV, but when I try to play it says unsupported file."

Actually, it's officially stated that MP4 is supported by Samsung TV. However, the compressed way for MP4 video can be different and complicated. Samsung TV can only recognize MP4 file with H.264/MPEG-4 AVC video codec and AAC audio codec. If your MP4 file is not compressed in this way, it can't be opened or played smoothly with your Samsung TV. Besides this, there are some other possible reasons:

* MP4 Video content will not play, or not play correctly on Samsung TV, if there is an error in the content or the container.
* If the Index Table is in error, the Seek (Jump) function is not supported.
* When you play MP4 video on Samsung TV over a network connection, the video may not be played smoothly.
* Some USB/digital camera devices may not be compatible with the player.

What if you really want to play MP4 files on Samsung TV? To solve "Samsung TV not playing MP4" issue, a widely recommended solution is convert MP4 to Samsung TV more compatible MP4 format. EaseFab Video Converter is an easy-to-use tool to help you fast and batch convert MP4 to Samsung TV supported file formats with zero quality loss. The program also supports encoding/re-encoding many other popular video formats like MKV, FLV, AVI, VOB, MOV, WTV, AVCHD, TMS, MXF, MVI and more. If you're a Mac user, simply turn to Video Converter for Mac, which has the same function as the Windows version.

Now download the program according to your computer system and follow the simple guide below to get incompatible MP4 files to play on Samsung TV nicely.

Launch this video converter. Click "Add Video" button and import the videos you want to convert or directly drag & drop them into the program. Batch conversion is supported. You can add more files at one time.

Now click the Profile icon to reveal output panel. And and mouse cursor to TV and Players category to Select Samsung TV as the output format. The optimized output format will contains the best video settings for playback on your Samsung TV. 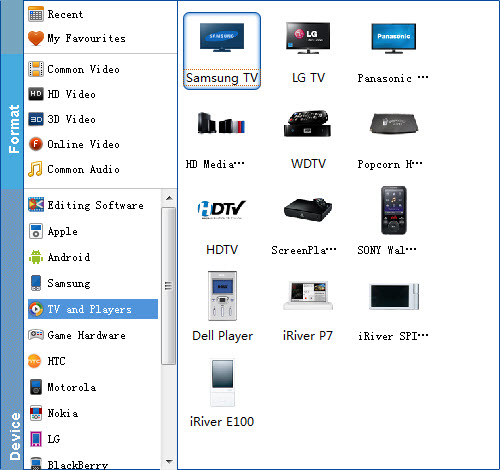 Tip: Click the "Settings" button and customize proper video/audio parameters if necessary. Video size, bitrate and fame rate are flexible and can be adjusted as you like.

After the above steps are done, you can click "Convert" button to convert your MP4 Video to Samsung TV comfortable MP4 format. Easy operation and faster conversion speed, these two are the most outstanding points of this Samsung TV video converter.

Once the conversion is done, simply click "Open" button to find the converted MP4 files and then you can watch them on Samsung TV via USB, DLNA, WLAN smoothly.