How to Play Blu-ray on Microsoft Surface Hub

Microsoft has announced the Surface Hub, a huge 84in touch screen display with 4K resolution and stylus support. The screen is intended to be used as a next-generation whiteboard, but behind this basic function the Hub runs a full build of Windows 10, complete with applications optimised for the massive screen. The 4K screen with Surface Hub Tablet looks nice on your desk when you work with images or video. Therefore, you will have no video resolution problems when you try to watch 1080p Blu-ray movies on Surface Hub Tablet with 4K screen resolution.

However, the Surface Hub does not have native support for Blu-ray disc playback. In fact, it's easy to watch Blu-ray videos on Surface Hub tablet as long as you got a Blu-ray Ripper in hand. This article will tell you how to convert Blu-ray to Surface Hub playable video formats so that you can enjoy your Blu-ray movies on Surface Hub with ease.

First of all, download the Blu-ray to Surface Hub Converter free trial:

Converting Blu-ray to Surface Hub tablet with EaseFab Blu-ray Ripper is simple as ABC. After downloading, follow the wizard to install and run the program. Then follow the steps below to rip Blu-ray to Surface Hub devices playable videos in a few clicks! The below guide takes Blu-ray Ripper for Windows (Windows 8 compatible) screenshots for example.

How to rip a Blu-ray for playback on Surface Hub

Insert the Blu-ray disc to the Blu-ray Disc drive or DVD to the DVD-ROM and click the "Load Disc" button to have movies uploaded to the program. Here you can also import DVD folders, ISO files and IFO files to convert.

If you want to rip Blu-ray with subtitles, please select the subtitle and audio track from the corresponding drop-down lists. 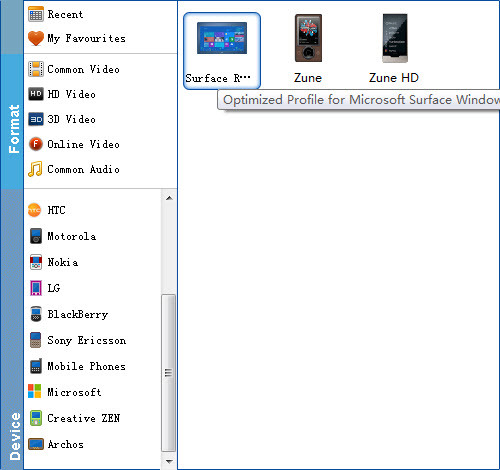 Tip: If you want, you can then click "Settings" to adjust the video parameters manually. Remember the file size and video quality is based more on bitrate than resolution which means bitrate higher results in big file size, and lower visible quality loss. According to my experience, to watch Blu-ray videos on Surface Hub, 1080p with 4000~6000kbps is just all right.

After all the necessary settings, hit on the big "Convert" icon and start Blu-ray movie to Surface Hub Tablet conversion. When the conversion completes, you could find the generated MP4 file by click "Open" button.

How to transfer converted Blu-ray video to Surface Hub Tablet?