Here is a simple way on how to rip Blu-ray to Android friendly video formats so that you can put a Blu-ray on your Android smartphone or tablet for entertainment on the go.

Many people prefer to watch movies on their mobile devices these days. And there are many movie apps for Android that make it much simpler. Besides this, you can also transfer or stream your local movies to your Android phone or tablet for entertainment. But what if you want to put some Blu-rays on your Android device so that you can watch them on the plane or the trip? Luckily, it's possible to take one of your Blu-rays and put it on your Android device from a PC or Mac. In this guide, we'll look at how to convert a Blu-ray to Android-friendly video formats and then transfer it to your Android gadget for playback smoothly.

First of all, a Blu-ray to Android ripper is badly needed if you have the needs to load Blu-ray content to any Android cellphone or pad. There are many programs out there that can get the job done.If you're interested in digitizing and ripping your Blu-ray collection and don't want to be held back by restrictions and slow processing, EaseFab Blu-ray Ripper will be your best choice. With it, you can rip Blu-ray to Android compatible video files with fast encoding speed and excellent output quality. It's available for Windows 10, 8.1, 8, 7, etc. And it has a Mac version compatible with macOS Big Sur and lower. Its features include but are not limited to:

● Support any new, old, classic and even damaged Blu-ray and DVD discs regardless of region codes and copy-protections.
● Offers a library of profiles for different Android phones and tablets from Samsung, Sony, Huawei, Google, Amazon, Lenovo, Xiaomi, Acer etc. with good quality-size balance.
● 1:1 make an exact copy of a Blu-ray or a DVD within 5 Minutes.
● Finish the Blu-ray to Android conversion at fast speed with hardware acceleration.
● Edit Blu-ray or DVD videos by trimming, merging, cropping, adding subtitle, etc. Set parameters at will.

To begin with, you need to download and install EaseFab Blu-ray Ripper Windows or Mac version on your computer. The guide below takes the Windows version for an example. Mac version has the same process. Please not that a Blu-ray drive is necessary for ripping Blu-ray discs. If you want to rip DVDs to Android device, this process will work as well.

Insert the Blu-ray disc to the BD drive and then click the "Load Disc" button to have Blu-ray movies uploaded to EaseFab Blu-ray Ripper. A few seconds later, the full title list of Blu-ray with the auto-checked main title are presented. Besides Blu-ray disc, BDMV Folder, ISO image and VIDEO_TS folder can also be taken as source for decoding.

Step 2: Select a profile for your Android phone or tablet

Select an Android friendly format, e.g. H.264 .mp4 for conversion. Basically the "Android Tablet" and "Android Phone" from "Android" category are two universal formats for all Android tablets and smartphones. Besides, there are optimized formats for Samsung, Motorola, Acer, Asus, Sony, Toshiba, HTC, etc branded Android devices; choose a proper one as you need. Or depends on your device, you can choose a suitable video format from "Android", "Samsung", "HTC", etc. catalogue. 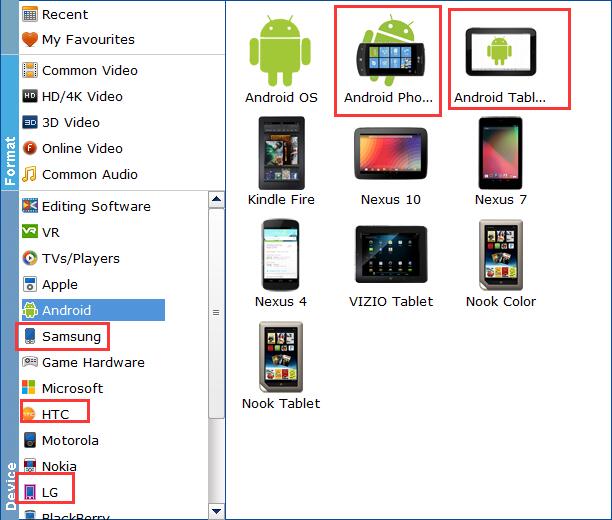 Optionally, you can choose desired subtitle or audio track from the corresponding drop-down Audio or Subtitle lists. You're also allowed Add *.srt/*.ass/*.ssa Subtitle to your Blu-ray or DVD movie if there is unwanted subtitle track there. You can also click "Settings" button to customize the output video and audio settings by yourself.

Click "Folder" button in the Output bar, and select a destination folder to save your rip. Now you're ready to hit "Convert" button to begin ripping Blu-ray to Android phone or tablet supported video formats.

Once the conversion completes, you can transfer the ripped Blu-ray video to your Android device. And once the Blu-ray file is on your device and you can watch it with a media player anywhere.