Blu-ray is the main reason the home theater experience has become popular, serving as a foundation for elevating both video and audio quality. However, as with DVD discs, Blu-ray also has a dark side: Region coding (also referred to as region lock). Blu-rays in different areas are encoded with different region codes and discs without region coding (region-free) can be played anywhere. In this post, we're going to show you all the details about Blu-ray region codes, Blu-ray regions and how to make a Blu-ray region free.

Part 1. Why Are There Different Blu-ray Regions?

Why are Blu-rays coded with different regions? The short answer is money.

Typically, movies are distributed in different areas at different time. Normally, a movie will be released in the U.S. first, and months later in Australia and other countries. In other words, the Blu-ray version may be released in the U.S. while the same movie is still being shown in theaters. Considering the price differences across different markets, if there are no Blu-ray region codes, people may buy a cheaper version from other region, which will hurt the profit of the film producer. The Blu-ray regions can guarantee the greatest possible return on the movie investment.

Part 2. What Are the Blu-ray Region Codes?

Unlike DVD region codes using numbers to indicate a particular area or region, Blu-ray region codes use letters to help recognize in which region this Blu-ray disc can be played. In total, there are 3 separate Blu-Ray region codes. These codes are classified alphabetically as Region A, Region B, and Region C. Blu-ray discs that have been manufactured in region A are embedded with region code A, and are therefore only usable with players from region A. The same is applicable for regions B and C. Below is a map showing how Blu-ray region codes are separated and administered by geographic location.

The map below shows these areas: 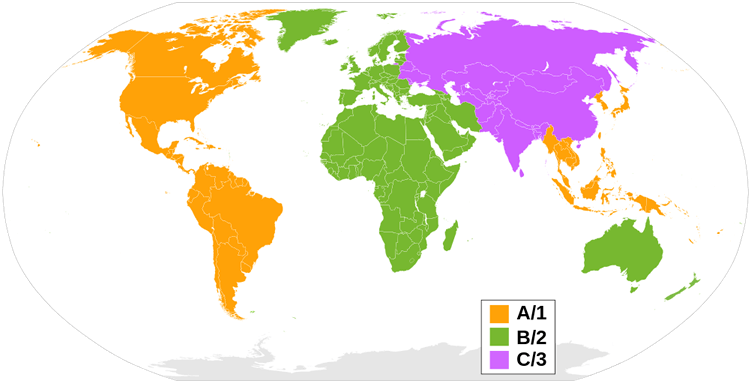 Classified as region-free as it applies to countries listed in Regions A, B, and C.

Part 3. How to Tell What Region a Blu-ray Is?

The region code for Blu-ray Discs is on the disc or located at the back of the disc case.

#1. Get A Multi-region Blu-ray Player

Unlike that you can easily change the region code on a DVD player, the region code settings for a Blu-ray Disc player device cannot be changed. But you can purchase a region-free Blu-ray player and you can play Blu-rays from any regions freely. Search on Google and you can find multi-region DVD players from Sony, LG, Samsung, Panasonic, JVC, and many other famous brands on Amazon, Best Buy, Walmat, 220-Electronics, etc. A region-free Blu-ray player is normally priced from $135 to somewhere if you have to ask, way expensive. Be careful with the supported regions and Blu-ray formats when you select a multi-region Blu-ray player.

There is another option play any regions, Blu-ray formats, protections freely without having to pay $135. You can remove region codes from any foreigh Blu-rays with a Blu-ray ripping software. After you unlock A, B, C regions and Blu-ray protections, you can play a foreign Blu-ray movie on the Blu-ray player, portable devices or elsewhere or burn the region-free file back to a recordable disc freely.

The region code settings for a computer Blu-ray Disc optical drive can only be changed within computers that have software capable of effecting that change, and can only be changed a total of five times. Refer to the Blu-ray Disc player software documentation for instructions on how to change the optical drive region code settings.