How Can I Play A Blu-ray disc on A Regular DVD Player?

Blu-ray discs can't be read by regular DVD players, but there are always solutions to make this happen.
Read on the find the detailed reasons and possible solutions.

Why Blu-ray discs can't be played on regular DVD players?

In other words, Blu-ray discs aren't compressed the same way as CD or DVD discs, which means that Blu-ray discs can't be read by your CD or DVD player. It's the same way that your DVDs don't play in your CD player: the formats are incompatible. But as technology develops, it is usually backwards compatible. DVD player manufacturers didn't account for a new technology so they couldn't design DVD players to be Blu-ray ready. Blu-ray manufacturers, however, knew all about DVDs and built Blu-ray disc players that can also read older formats, like DVD and CD. As a bonus, Blu-ray players up-scan DVDs to simulate HD quality -- though true HD video is video that was recorded in HD.

The Blu-ray Disc Association has plans for a dual-format disc that contains DVD and Blu-ray data tracks, according to Blu-ray.com. These discs will play in DVD and Blu-ray disc players, but only using the proper format – so you still won't be able to put a Blu-ray disc into your DVD player and watch a movie in HD.

If you still purchase and collect DVDs, a DVD player is fine, and if you also own a Blu-ray Disc player, you can still play those DVDs. Since most Blu-ray Disc movies come with a DVD copy, you have both options for playing the same movie on Blu-ray Disc and DVD players.

What if you still want to watch a Blu-ray disc on a regular DVD player?
- Digitize and Rip Blu-ray to DVD Player Compatible USB Formats

Before the conversion process, you should be sure to look in the "Technical Specifications" listing in your DVD player's instruction manual to see what formats it will support before potentially wasting your time.

1. Majority of DVD players only accept MPEG-2 in a standard VOB format, and very few of them are compatible with MPEG-4 videos.
2. All standard DVD accept videos that conform to a certain resolution and BVOP settings. For instance, a majority of DVD players limit import to a resolution of 720 by 756 or 720 by 480. While, MKV files usually comes with 1080p, 4K or even higher solution than this, your DVD players will not have the capacity to play it.
3. Newer models of DVD players can be able to play AVI files on one and only one condition, the AVI file has to be further encoded with another codec such as Xvid, Divx, WMV and MPEG-1 just to name a few.

How to convert Blu-ray to DVD Player Supported File Formats

To get the job done, EaseFab Blu-ray Ripper is highly recommended. This program is available to cope with all store-bought Blu-ray and DVD discs without hassle. With it, you can convert any Blu-ray to DVD player compatible USB file formats such as DivX, AVI, MPEG-2, MP4, etc. files with fast encoding speed and excellent output quality.

To begin with, you need to download and install EaseFab Blu-ray Ripper Windows or Mac version on your computer. The guide below take Windows version for an example. Mac version has the same process.

Step 1. Run EaseFab Blu-ray Ripper. Insert your Blu-ray disc into your BD Drive (necessary for ripping Blu-ray) and click Load Disc button to upload Blu-ray files. At the bottom, you can select your desired subtitle and audio track.

Step 2. Select a DVD player compatible file format from Profile lists. You'd better look in the instruction manual for your DVD player to see what type of video files it supports. For most common DVD players, MPEG-2 from Common Video category is recommended. You can also choose "DIVX" as the output format. 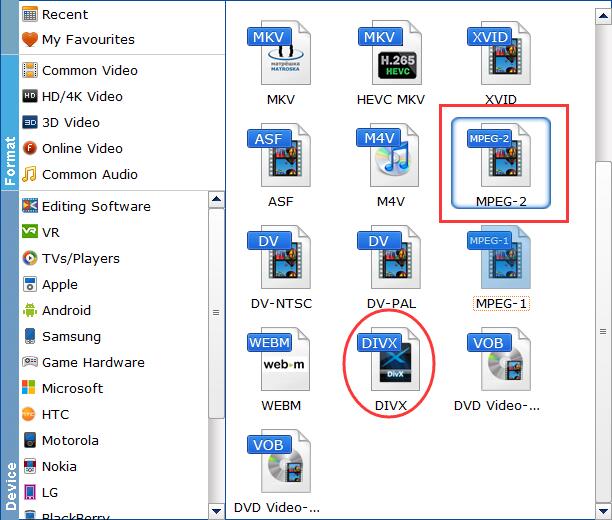 Tips: You can also click Settings to customize output video parameters such as video size, video bitrate, audio channels and so on depending on your needs. Here you're recommended to adjust the resolution from default Original to 720*480 or 720*756.

Step 3. You can select a destination folder for the output file by clicking Folder icon in the Output bar, you can also let it be the default one. After every step presented above has been performed, press the Convert button and wait until the conversion process has been completed.

Once the conversion completes, you can click Open to find the result video files. Copy them to your flash drive and then you're able to access the converted Blu-ray files through your DVD player's main menu and watch them on your TV screen.

To this day, video streaming subscription has surpassed physical media as a more popular choice for home entertainment. And there are few ways watch your Blu-Ray collection on your computer without shelling out cash for the privilege, even if you already own a Blu-ray drive and bought your movies. Instead, it's simpler to rip your Blu-rays to your computer and play them in whatever app you want.

Failed to play Blu-ray with VLC on Windows and Mac? Take it easy. This page will introduce best solutions for this VLC Blu-ray playback issue.

How to Use VLC to Convert M3U8 to MP4

Here we shows you how to convert .m3u8 file to .mp4 with VLC in details. And we will also share the top 3 VLC alternatives to help you get the job done.

This article shows you 2 specific methods on how to use VLC to compress large video files and as well as the best VLC alternative to reduce video size professionally for your reference.