Cameras from Canon, Panasonic and Sony shoot footages in AVCHD, for instance, Canon XA25, Canon Vixia HF R21, Panasonic Lumix DMC Series, Sony Cyber-shot series, Sony Handycam, Sony HDR-SR10E and Sony Alpha NEX series. Most of the AVCHD footages are in MTS format, which is a high-definition MPEG Transport Steam video format. Want to edit AVCHD MTS files in Windows Movie Maker and create a home movie? Then you will disappointed since MTS is not supported by Movie Maker. If you're attempting to use .MTS files in Windows Movie Maker, you have to first convert MTS to Windows Movie Maker supported media formats like WMV, AVI, ASF, etc. Haven't figured out a way? Now here is an option.

How to convert MTS to Windows Movie Maker supported format

After installing the video converter, launch it and click Add Video button to import the MTS files you want to edit in Windows Movie Maker. You can also directly drag the video files into the program directly.

Hit the "Profile" box and select "HD Video" > "WMV HD" on the dropdown menu as output format. Besides, you can also choose AVI HD as output if you have not installed the .wmv codec. 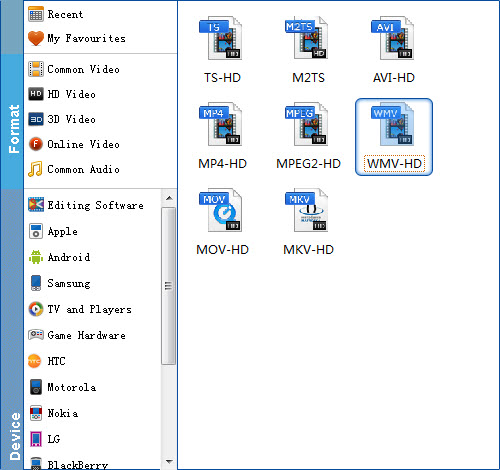 Tips: If you like, adjust video and audio parameters, including the Bitrate of Video and Audio, the Codec of Video and Audio, Video Size, Sample Rate, Frame Rate, Audio Channels, etc., by clicking the Settings button on the main interface for getting the best quality.