How to Work With MTS files in Cyberlink PowerDirector

Cyberlink PowerDirector is feature-packed video editing software which is semi-professional so as to be suitable for most of users. It can import most of the video formats which includes MTS. However, there are still some video, audio codec problems while importing/editing MTS files to PowerDirector (PD 13 included), like no audio with .MTS video, slow choppy playback of .mts format video, or even PowerDirector won't recognize MTS files. To avoid any problems and save time, the easy and best workaround is to transcode MTS footage to PowerDirector most compatible format like MPEG-2.

EaseFab Video Converter is a highly-recommended video converting tool for you to convert MTS files to PowerDirector supported formats without quality loss. This program features high efficiency and seamless conversion. With it, you can do batch conversion from AVCHD, MTS, VOB, MOV, MP4, and more to PowerDirector compatible formats in simple clicks of mouse. Here's how to do it.

Firstly, free download and install the MTS to PowerDirector Converter:

How to convert MTS to MPEG-2 for Cyberlink PowerDirector

Step 1. Import MTS to the converter

Run the MTS to PowerDirector converter and click the Add Video button to import the MTS videos to be converted. The converter supports converting multiple files at a time.

Click the Profile bar, and move mouse cursor to "Editing Software" and then choose "MPEG-2" as the output format. The output video will keep the original quality of MXF video and seamlessly fit PowerDirector 13, 12, 11, 10, 9, 8 and more. 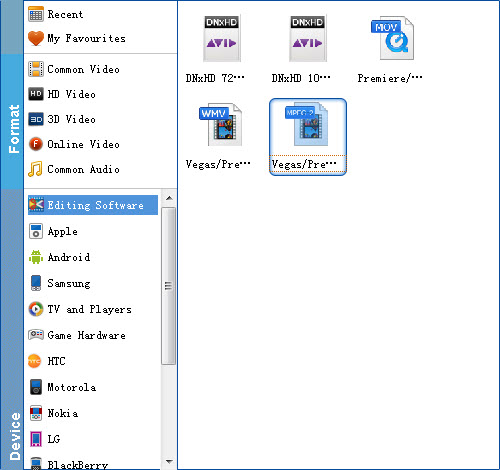 When all the settings is OK, simply hit the big Convert button on bottom of the main windows and the conversion from MTS to MPEG-2 which is fully compatible with Cyberlink PowerDirector will begin immediately.

How to Convert MTS to Use in Pinnacle Studio

How to Convert MTS files to Edit in Sony Vegas