How to Make MP4 files Work in Lightworks Perfectly

Lightworks is a professional non-linear editing system (NLE) for editing and mastering digital video in various formats, including 2K and 4K resolutions, and television in PAL, NTSC, and high-definition formats. It is officially stated that MP4 is supported by Lightworks. However, many guys have found it painful experience to import MP4 to Lightworks and you may also encounter Lightworks MP4 file importing problems like this:

"I just started using Lightworks on account of just starting a Youtube channel and I'm having issues with .mp4 videos. I use the Hauppauge HDPVR2 to capture and record video games. I also use Audacity to record my voice. The software that Hauppauge uses with the HDPVR2 has the video exported into the MP4 filetype. Now for some fucking reason, I can't import the rendered MP4 video file that my HDPVR recorded. I played it back in Windows Media Center and it seems to be fine. How can I get Lightworks to import these sorts of MP4 files?"

So, what is the reason. Well, Lightworks supports a broad range of codecs, but they must adhere to professional television standards. If you read about the codecs it supports on the Tech Specs page, you will find the MP4 is the native supported format for Lightworks. However, as MP4 is a multimedia container which may contain various different video and audio codecs, if the codec are supported by Lightworks, you will have no problem to import MP4 into Lightworks. If not, you will need to perform a codec transcoding process.

To convert MP4 files to Lightworks easily and quickly, EaseFab Video Converter is recommended. With it, you can transcode comprehensively convert virtually all MP4 files to Lightworks editable H.264 MP4 video. Besides MP4, you can also convert other unsupported file formats such as AVI, WMV, MKV, FLV, VOB, MPEG-1, MPEG-2, 3GP, AVCHD, MXF, etc into Lightworks, Sony Vegas, Windows Movie Maker, Adobe Premiere, etc. for post video editing workflow. If you're facing problems editing with Lightworks, chances are you already installed this great utility. If not, download it from below.

Step 1: Install and launch the MP4 to Lightworks Converter in your PC. And then click "Add Video" button to load your MP4 videos into it. Batch conversion is supported so you can import multiple video files at a time.

Step 2: From the drop-down list of "Profile" you can select "MP4" from "Common Video" category as the output format. When you have selected the output format, you should select a destination folder for the output file by clicking "Output Folder", you can also let it be the default one. 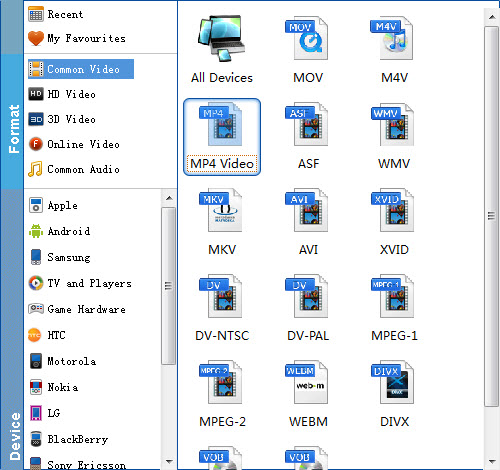 Step 3: After all settings is completed, hit right-bottom "Convert" button to begin the conversion from MP4 to Lightworks conversion process.

When the conversion is completed, you can click "Open" button to get the output files effortlessly, and now you will have no problems to import and edit MP4 files with Lightworks.